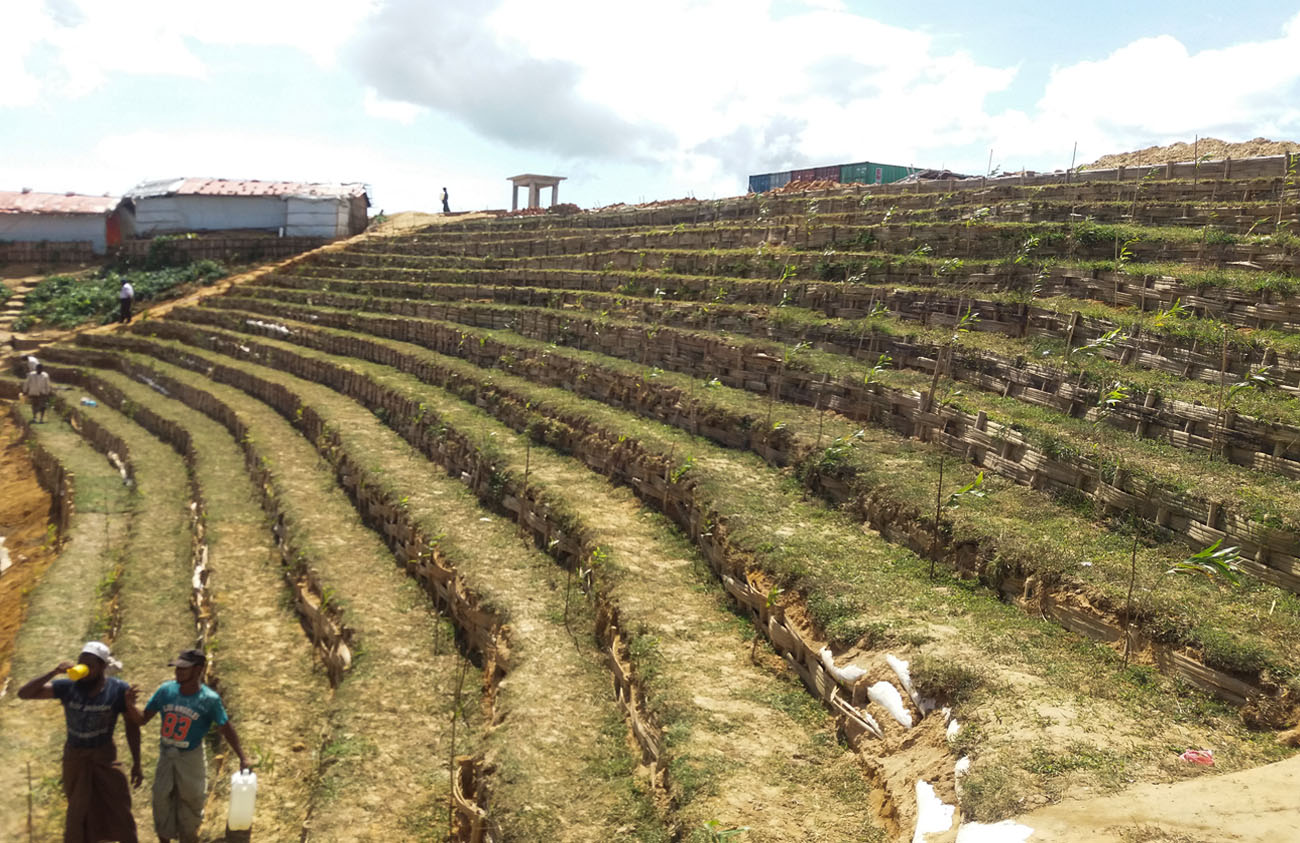 What are the impacts of refugee crisis on the natural ecosystems of Bangladesh?

Since 25 August 2017, Bangladesh has been providing shelter to Rohingyas, the Muslim minority of Myanmar, who escaped the genocide in their homeland. As of April 2020, about 860,000 Rohingya refugees, of which more than 52% are children, are staying in 34 very congested refugee camps in 2,500 hectares of denuded forestland of Cox’s Bazar-Teknaf Peninsula.

In absence of tree cover the whole area became very dry and hot, the exposed hilly terrain without plant cover became prone to soil erosion and landslide, and extensive earthwork made the slopes unstable and filled up the hilly stream channels. As a result, the largest refugee camp in the world became very vulnerable to landslides and floods in monsoon which brings more than 3 meters of rainfall to this region in any given year.

What interventions have been practiced for the refugees? (broad description)

To tackle the climatic and physical vulnerabilities of the refugees, prior to the monsoon of 2018, thousands of refugee families were relocated to securer higher ground; many risky slopes were covered with tarpaulin sheets; tens of kilometers long drainage system was installed in many camps; and many kilometers of natural channels were re-excavated. Besides, many hilly slopes were stabilized by terracing and planting tree saplings and tufts of vetiver grass.

In 2019 alone, for example, the UNHCR and its partners planted about half a million tree saplings, legumes, and shrubs belonging to 27 species. Refugees were engaged to protect the saplings following an agro-forestry model. Recent reports noted that, in 2019, more than 300 hectares of camp land was restored by the UN agencies, their partners, and Bangladesh Forest Department.

Improved microclimate of the refugee camps, increased shade availability, and increased nutrition to the refugees from fruit-bearing trees. Increased income to refugee families from being engaged in the interventions (e.g. site preparation, plantation, and after-care of the plantation) as labourers. Raising sapling and tufts in nurseries increased employment and business in the locality, outside the camps.

Impacts of implemented interventions on reducing disaster vulnerability of refugees, and ecosystem services. Effectiveness and cost-benefit analysis of the NbS interventions.

Replication continued in the Kutupalong Refugee Camp area. Scale up beyond the camps is not known.

The ecosystem-based approaches tested and practiced in the Rohingya refugee camps in Bangladesh show how even in dire situations, like refugee crisis, NbS can help to reduce disaster risks and improve living conditions of the most vulnerable people. The Joint Response Plan 2020 published on 3 March 2020, has mentioned that another 200 hectares of refugee camp area will be included in the environmental restoration programme in 2020.

Swamp Forest Restoration
Haors in the north-east of Bangladesh