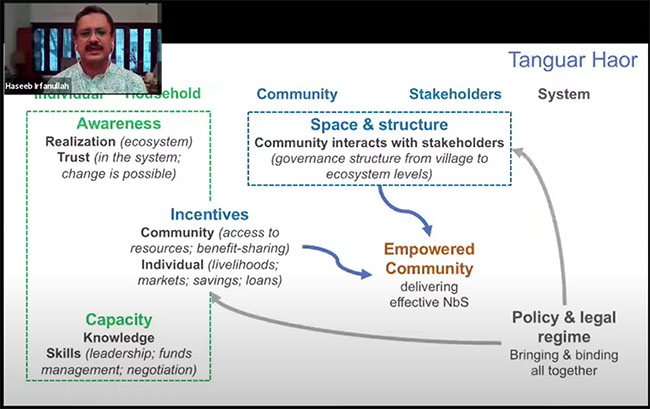 On 07 – 09 July 2020, the Nature-based Solutions Initiative (NBSI) at the University of Oxford hosted an online conference – NbS Digital Dialogues. The conference received huge participation of 750 people from different geographic locations all over the world. The dialogue covered three key-note presentations, six panel discussions, three poster sessions on vital areas for sustainable nature-based solutions (NbS). Leading experts from the world presented different key topics and issues on NbS throughout the three days of the dialogue. Dr. Saleemul Huq and Dr. Haseeb Md. Irfanullah – two experts from Bangladesh were involved in the digital dialogue as panelists in the session 06 and session 03 respectively.

Dr. Haseeb Md. Irfanullah, Expert, ‘Capacity Building for Nature-based Solutions (NbS) to Climate Change Adaptation’ project, ICCCAD was one of the panelists in the Session 03 on NbS with, by and for People in the second day of the NbS Digital Dialogues. To answer the question of “Who is in the driving seat in the move towards NbS in Bangladesh?” – Dr. Irfanullah presented the case of Tanguar Haor to explain how the community leadership remains vibrant with support from political system. He started with stating on the wetland’s poor conditions due to the over exploitation of resources, especially fisheries through leasing system by the local elites since 1930s. Moreover, the people living around this wetland are totally excluded. But then, the Government stopped it and focused more into conservation in 2003. Thus, 2006 has been a very significant year for that wetland as government started a project with some national and international organizations by bringing together the people and other stakeholders to sustainable manage the Tanguar Haor. Over the next 10 years, adopting the inclusive governance system allowed the local communities to access to the natural resources which empower the community along with protecting biodiversity. But still there are some barriers, such as – lack of funding, less confidence in local community and weak policy framework to support the actions on the ground. For the successful on the ground actions for NbS, there are needs to create inclusive community by building awareness, providing capacity and incentives. The session highlighted that NbS only work when local people are empowered. NbS is all about the inclusion, participation, power structures, rights, justice by putting people at the centre of it. 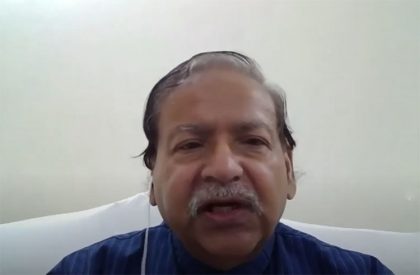 Dr. Saleemul Huq explaining the importance of planning to up-scale the NbS in Bangladesh

Saleemul Huq, Director, ICCCAD was one of the panelists for the Panel 6 on Governing NbS in the third day of the NbS Digital Dialogues. Though Bangladesh is still new with NbS, Dr. Huq mentioned that some innovative actions have been taken in place. Under the leadership of the Standing Committee on Ministry of Environment, Forest and Climate Change, M.P. Saber Hossain Chowdhury called for a Planetary Emergency which recognizes the dual emergency – biodiversity emergency and climate crisis – which the country has been facing. Later, it was adopted unanimously by the Bangladesh Parliament in November 2019. Other than that, there has been strong tradition on national planning and the Ministry of Planning and Bangladesh Planning Commission is figuring out how to incorporate NbS in short-term national level planning process. In addition, there are opportunities to incorporate NbS in the long-term development planning. In the BDP2100 (Bangladesh Delta Plan), the government is very keen on including NbS in its long-term visionary plan. Planning is very crucial to go for the right implementation pathway and thus, we need to put our research into practice. But still, there remain challenges in finding practical cases and examples to trigger the planning process. Hence, ICCCAD is developing a NbS Bangladesh portal with support from NBSI to collate evidence from the ground having a network of researchers, practitioners and policymakers to scale-up the implementation of NbS from across Bangladesh. The portal was launched on the International Day for Biological Diversity (22 May 2020). Lastly, Dr. Huq invited everyone to bring the experience on NbS at the Gobeshona7 conference (January 21 – 24, 2020) where there will be a major session on nature-based solutions to advocate more on turning the research into action. The outcome from Gobeshona will be linked with Global Adaptation summit as well.

Watch all the recordings from the NbS Digital Dialogues.

Latest publication on ecosystem services and Bangladesh
16th May 2020